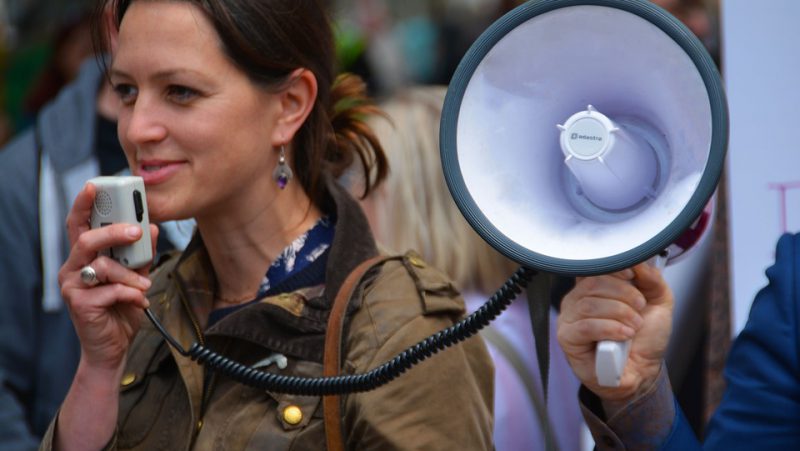 How can media contribute to international development cooperation? Ute Schaeffer, Head of Media Development, says that access to information in the digital age is more important than ever.

We’ll begin on a positive note – for journalists as well as their “clients”. More people are using information today, and more media producers and information sources are available. In other words, information now has a greater influence than ever on social, economic and political developments in regions and their societies.

The Arab Spring, for example, could never have happened without social media. And the strengthening of Ukraine’s civil society as of 2004 was possible – despite censorship and an authoritarian political system – because people could exchange ideas via the Internet and develop stronger voices.

That’s why DW Akademie’s mandate to develop media has become more important – and more challenging – than ever. Information is now accessible in various degrees in many parts of the world. As a result, media development has become a central aspect of development policy. DW Akademie is meeting this challenge with an innovative, interdisciplinary approach.

When media decide on war or peace

What is important? What moves people? Citizen journalists at a DW Akademie workshop in Ghana

Modern media development no longer focuses exclusively on journalists. There are two reasons for this. Firstly, people can only demand their rights in a political sphere if they have access to information. This determines issues such as education and knowledge, and ultimately a person’s personal freedom. Media can even decide on war or peace, as we’ve been seeing in Ukraine, Syria and Iraq. Secondly, given media’s rapid development, it is no longer enough to improve journalists’ skills. We now need a broader approach if we want to strengthen freedom of expression over the long term. Whether the media push developments ahead or simply slow them down depends on key factors, including:
• conditions under which journalists work
• criteria and professional standards for content
• whether all levels of society have access to media
• whether people can deal with, and make use of, the flood of information

In the 50 countries where we’re working the reality can be bleak. Women’s issues in the rural areas of Burkina Faso, Kyrgyzstan and Bangladesh are rarely covered by the media, and as a result neither are major issues such as education and health. Topics that are taboo in many countries are ignored, such as the ongoing violence in Colombia and coming to terms with Guatemala’s recent history. Gays and lesbians in Uganda are politically sidelined and ignored or even harassed by the media. While this can be due to censorship, more often it’s a result of politically biased editorial offices, corruption or self-censorship.

Successful and modern media development as conducted by DW Akademie requires a broad strategic approach. This can include coaching government staff and NGOs with regards to political frameworks, for example, or helping media and journalists develop business models so that they can remain, or become, financially independent.

We support press councils, professional associations and media organizations so that they can clearly represent and protect their interests in discussions with political decision makers. DW Akademie therefore has various focuses in the countries where we work. We rely on different partners, and are well aware that it can take time to produce measurable and sustainable results.

This is also why our country strategies run for three to four years instead of from one workshop to the next. Our country coordinators are media development specialists on location, familiar with its constraints and challenges. They also have wide networks. Our goal is not just to know what moves our target groups but also to be aware of potential, future issues that could effect the regions where we’re working.

One thing is clear: the future for journalists and media outlets in most regions where we work is a digital one, and it’s well underway. In Latin America, for example, there are numerous groundbreaking ideas online. Many of these media projects – like Guatemala’s “Plaza Publica” which DW Akademie is supporting – are based on investigative research. These alternative projects are run by dedicated citizen journalists, and without the backing of classic media corporations.

Courageous projects like these research and report on topics that traditional media won’t touch or are reluctant to do so, such as coming to terms with a country’s violent past. But there is progressand DW Akademie is bringing together innovative actors to exchange ideas and approaches. DW Akademie recently organized a meeting for digital pioneers from various countries to see how new technologies can be used to strengthen freedom of expression.

People who work in media development also need to be talent scouts. We are aware of ongoing developments, especially in the area of digital media. Whether it’s the Islamic State’s (IS) digital Jihad or Russia’s involvement in the conflict in eastern Ukraine, media are being used as weapons. IS fighters feel right at home in the digital world. And Russia’s media strategy is equally efficient and geared to its target group. As a result, independent media have disappeared. Human rights don’t play a role in the digital Jihad, or in the minds of propaganda bloggers, or in hate speeches aimed at TV and radio users.

Supporting partners on their own paths

Learning how to work with the media: school students involved in a new media project in the Palestinian Territories

A part of media development is about teaching skills for working with media content. This applies to both social and traditional media. When calls for violence are broadcast on radio in Nigeria’s Muslim north, or misinformation and warmongering appear on Ukrainian or Russian websites, that’s when users, listeners and audiences need to know how to work with various media formats. They need to be able to distinguish truths from untruths and facts from propaganda.

That’s why DW Akademie also focuses on media literacy so that hate speech, propaganda, agitation and calls for violence evoke no response. But the Internet also offers open spaces for societies, development issues and press freedom. In Egypt, for example, the only remaining form of independent media is the Internet; all others disappeared in 2014 as part of the official anti-terror campaign. This also affected universities, non-governmental organizations and civil society.

Journalism has turned digital all over the world, admittedly at different speeds. The Internet offers a platform, a two-way channel for distributing different media formats as well as receiving feedback.

The Internet has fundamentally changed journalism at every stage: from research to production to choosing multimedia formats for telling the stories. This requires new skills and is why partners all over the world are increasingly asking for digital training. Which interactive journalism formats are available online? they ask. How can journalistic contents be presented online? DW Akademie focuses on key issues in digital developments such as effective social media strategies for media makers, ethical questions on the use of social media, data driven journalism and online research as well as digital security and mobile reporting.

This is not about passing down fancy development concepts from the global North to the global South, but about supporting partners in pursuing their own paths. This is both a demanding and enriching task for us. And it’s why we’ll continue to find long-term answers to the question that essentially drives us: what will remain once we’ve left?